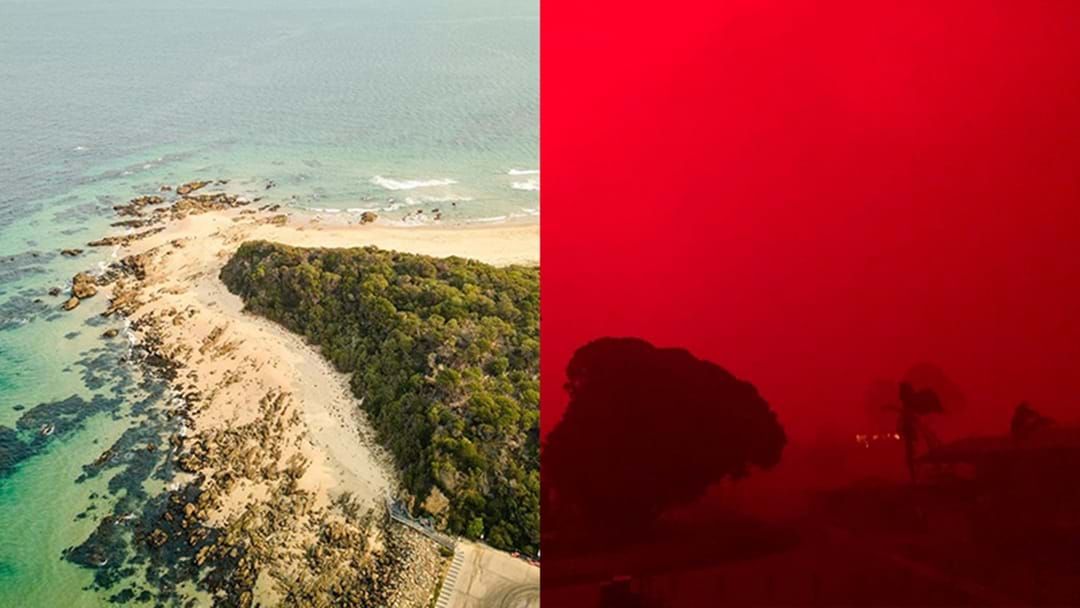 A fire has hit a Victorian coastal holiday town and people are being told to go into the water as warning sirens sound.

Authorities believe about 4000 people are still at Mallacoota, which was hit by fire at about 8.30am on Tuesday.

"Everyone is hopefully down on the foreshore in the water," Don Ashby told ABC on Tuesday morning as emergency sirens sounded.

"We've all been evacuated to the wharf. Got the life jacket on, ready to get in the water," one evacuee shared to Twitter.

The fire has cut power to the town, with AusNet Services reporting 5700 properties in East Gippsland without electricity due to the fires, and another 1800 in northeast Victoria also down.

Mobile and landline phone lines are also down in parts.

"Mallacoota this morning...we had to flee north to Merimbula to escape the fires. Second photo is our view in Merimbula this morning. Black ash falling everywhere. I just hot notification that Mallacoota township was just breached. Prayers for those who stayed," wrote one evacuee in an Instagram post.

"It's not pleasant, it's pitch dark here and the emergency vehicles have disappeared from sight," resident and local community radio presenter Francesca Winterson told ABC Gippsland.

"The power's been out here a long time and we've run out of solar.

Properties have been lost in Victoria's east as out-of-control bushfires rage, but it's too early to confirm how many, Emergency Management Commissioner Andrew Crisp says.

The fires grew rapidly overnight due to winds and lightning strikes and have ripped through more than 200,000 hectares in Victoria's East Gippsland, it was estimated early on Tuesday morning.

Seven emergency warnings, the highest alert, remain in place across East Gippsland and there is another in place for a fire straddling the northeast Victoria-NSW border at Walwa/Corryong.

Three strike teams are looking after thousands of people still believed to be in coastal Mallacoota, Mr Crisp said.

"We are naturally very concerned about communities that have become isolated and to get an appreciation about other losses there could be we'll be putting helicopters up doing reconnaissance flights," he said.

By Monday evening, as temperatures soared and the fires started creating their own weather systems, about 1000 firefighters were working on the blazes.

Towns including Cann River, Bruthen and Orbost had been impacted by the fire and assessment teams will be sent to survey the damage.

The Princes Highway is closed between Bairnsdale and Genoa. The fire has also crossed Great Alpine Road at Ensay.

A cool change swept through the region after extreme heat on Monday, but windy conditions remain, further fuelling the fires and spreading ash.

Fireworks displays planned in the region for New Year celebrations have been cancelled because of the fire risk.