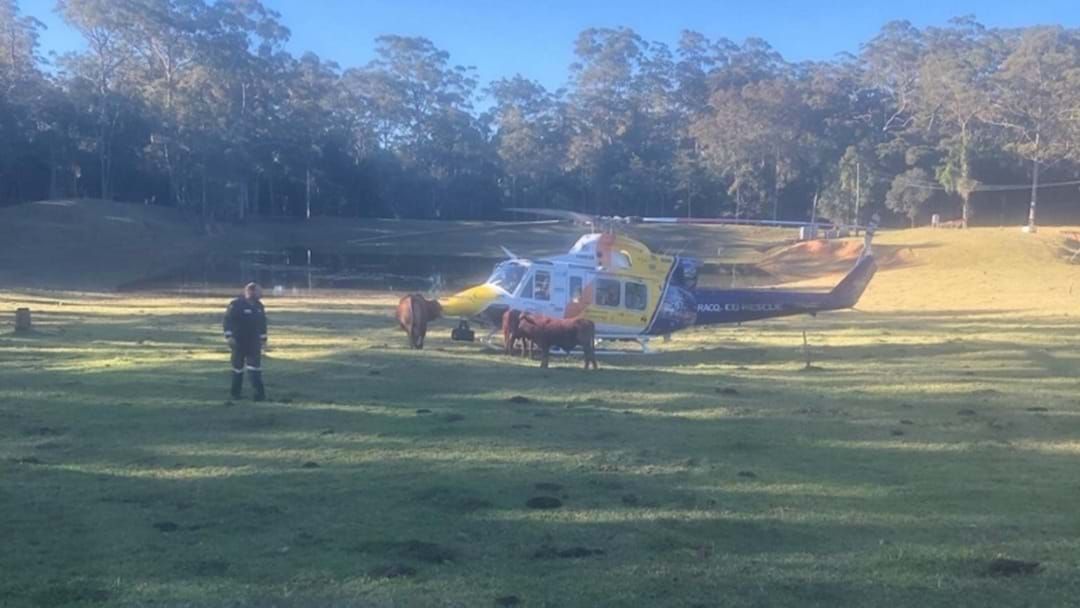 A tourniquet applied by a mate has helped save the life of a farmer seriously injured when gored by a wild bull near Crediton this afternoon according to rescuers.

In what was an incredibly busy 24 hours for RACQ CQ Rescue, the Mackay-based helicopter flew more than 870km and for 13 hours to complete three primary missions.

A patient suffered serious leg injuries and substantial blood loss after being gored between the left knee and groin by a wild bull on a property about 95km west of Mackay late this afternoon.

RACQ CQ Rescue, as part of the Queensland Health Aeromedical Retrieval Network, was tasked about 3.30pm and flew directly to the scene within 25 minutes, landing in a paddock, just minutes after ambulance crews arrived.

The flying trauma team, with a doctor, Critical Care Paramedic and rescue crewman on board, spent 45 minutes stabilising the patient for the flight before airlifting him to Mackay Base Hospital in a serious but stable condition about 5.30pm. It is believed a wild bull jumped a fence to ‘mingle’ with domesticated cows.

Earlier today, the Mackay-based rescue helicopter was tasked by Queensland Police after a mayday call was received from a vessel near Bowen. Two people, a man and a woman, were on board a six-metre boat about 25km north of Hayman Island when one experienced a serious cardiac episode.

RACQ CQ Rescue was tasked about 10.45am and flew 45 minutes to the scene. A rescue crewman was lowered into the water and a Critical Care Paramedic went down the wire onto the small boat to administer CPR as the helicopter circled overhead for about 40 minutes. The helicopter returned to the PCYC oval at Airlie Beach to wait for the rescue crewman and paramedic to return to shore via boat before heading back to base in Mackay.

Late yesterday afternoon, a 63-year-old Victorian tourist was winched off a rocky ledge on Wolfang Peak, about 50km north of Clermont, after she became lost and fell more than 10 metres down a rock face.

RACQ CQ Rescue was tasked about 3pm and flew direct to the volcanic plug peak, about 260km south-west of Mackay, landing in a grassy paddock nearby to speak with rescue crews about retrieving the injured woman and her exact whereabouts on the mountain.

Once airborne again, the RACQ CQ Rescue crew, including a doctor, Critical Care Paramedic and rescue crewman, quickly located the stranded hiker on a precarious rocky ledge on a cliff face.

As the rescue helicopter hovered about 10 metres overhead, the rescue crewman was lowered down onto a small rock ledge to secure the woman into a rescue strop before both were winched up into the helicopter. The entire winch rescue of the woman off the rock face took less than 10 minutes.

The rescue helicopter was refuelled in Moranbah before transferring the woman back to Mackay Airport in a stable condition. She was then transported to Mackay Base Hospital by ambulance with a suspected broken ankle. It is believed the Victorian tourist had been in the state since early June.

RACQ CQ Rescue has already completed 374 missions this year, with every hour the helicopter is in the air on task costing the community-funded service about $10,500.

The Bell 412 rescue helicopter and crew services rural and remote communities across Central and North Queensland and is often the difference between life and death for hundreds of patients each year.