“We have a crisis” 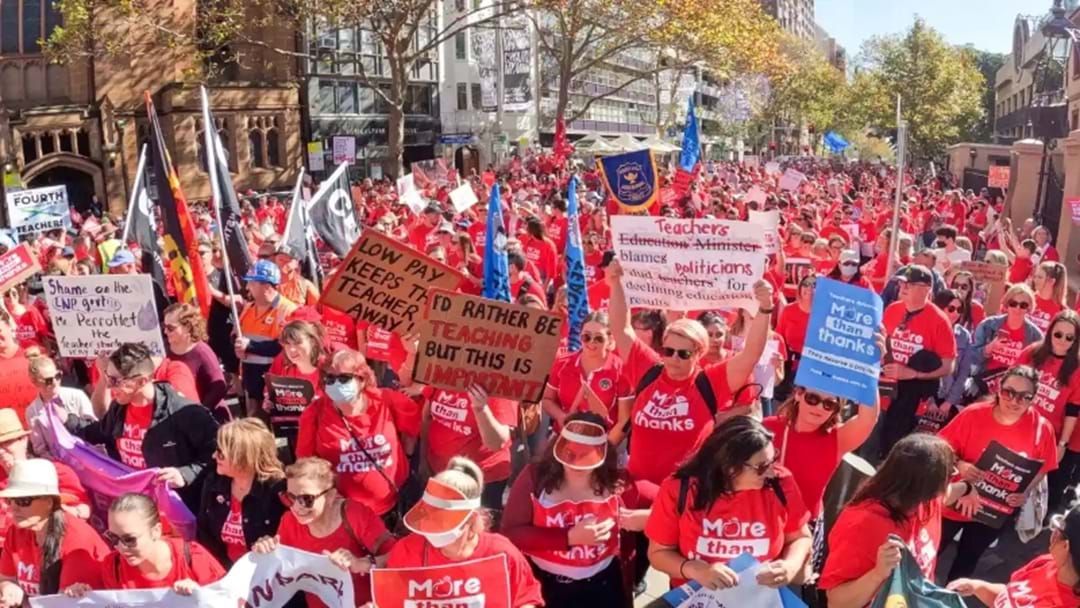 Thousands of NSW teachers from public and Catholic schools have gathered at Sydney's Hyde Park and other locations around the state on Thursday, in an historic joint strike over pay and conditions.

The third strike by teachers in seven months, follows the NSW Teachers Federation’s dismissal of the government's 3 per cent pay rise offer, included in last week's state budget, labelling it "an insult".

NSW Teachers Federation president Angelo Gavrielatos told Steve Price from Australia Today that "the government appears intent on doing anything but address the fundamental cause of the teacher shortage".

"The expectations placed on teachers and the reward are not adequate and are acting as a disincentive to attract and retain teachers," Mr Gavrielatos said.

“We have a crisis in the form of a teacher shortage, a crisis that is the government’s own making ... The government has known for years the causes of this crisis: uncompetitive salaries and unsustainable workloads.

With almost 2,000 staff vacancies across NSW, and with over half of those in regional areas, the union warns staffing issues won’t be fixed until salaries are improved.

Meanwhile, education minister Sarah Mitchell said she was disappointed by the decision to strike and accused the union of politicising negotiations over teachers' pay and conditions.

"I am disappointed with the action today, it really does make it very difficult for thousands of families and students and it's frustrating that they're continuing to push down this cause rather than just to negotiate with us and try and reach a good outcome," Ms Mitchell said.

"We've got the most generous pay increase on the table of anywhere in the country, yet other states aren't seeing this sort of industrial action."

Some schools have prepared minimal supervision for the day, while others will be closed.

Up to one million students are expected to be affected by the strike action.