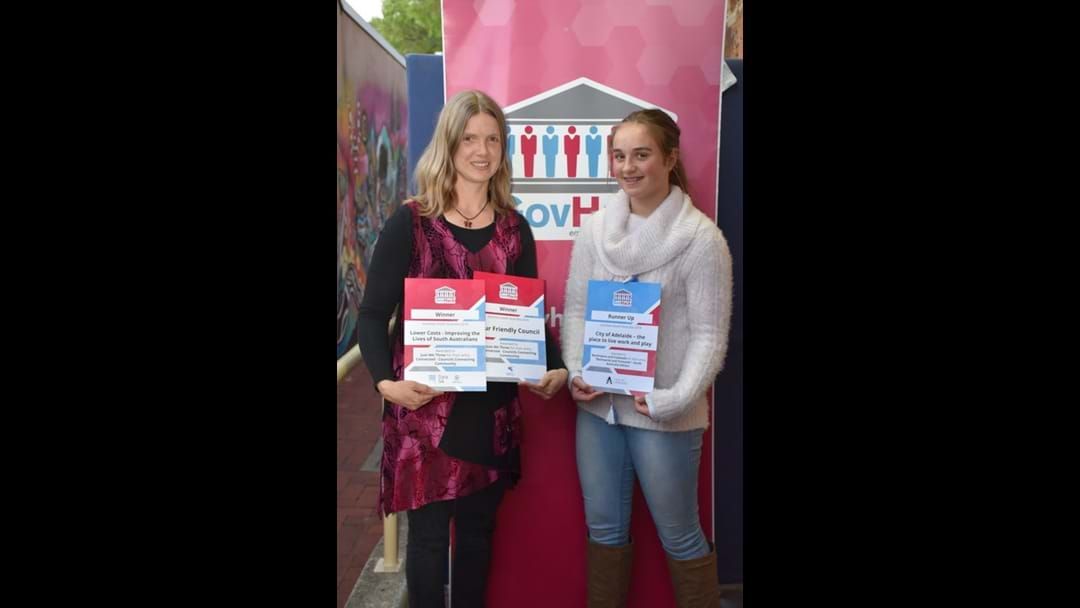 Charlene and Elly Bachmann accepting awards on behalf of their teams at the GovHack State Awards held on 10 October 2018.

Following the GovHack Open Data Competition held at the Mount Gambier Library in September local teams were recognised at the GovHack Open Data State Awards held in Adelaide on Wednesday 10 October 2018. Representing their teams, 'Just We Three' and 'Bachmanns and Fullwoods', Charlene Bachmann and Elly Bachmann were among other awardees from around the state at the prestigious event.

The Mount Gambier Library participated in the GovHack Open Data Competition held from 7 to 9 September 2018 with a total of 45 youth and adults competing simultaneously with other teams across Australia. During the 46 hour competition competitors were required to develop a concept to make open data more accessible to the public. Ideas such as apps, games, websites and even art were demonstrated. These concepts were judged on a three minute video promoting the working model of the team’s idea.

“Our concept demonstrated the potential to improve the mental health and physical wellbeing of citizens, and in doing so, lowering the cost of health and social services,” 'Just We Three' team member Charlene Bachmann said.

“Most importantly, ‘Connected’ has the ability to help councils connect individuals, families, carers to build a stronger and happier community,” Mrs Bachmann said.

The ‘Connected’ concept was announced as the winner of the prize category ‘Your Friendly Council’ sponsored by Local Government Information Technology South Australia (LGITSA) with a cash prize of $1,000. The team also received a further $1,000 cash for first prize in the ‘Lower Costs – Improving the Lives of South Australians’ category, sponsored by Data SA.

It was a wonderful night at the awards and we were very excited to be approached by a representative from LGITSA to discuss the possibility of actually creating our project idea which would see our interactive community kiosks situated in council libraries across South Australia, - 'Just We Three' team member Charlene Bachmann

Local youth team ‘Bachmanns and Fullwoods’ who created the project ‘Backwards and Forwards’, an interactive history board game based on South Australian figures, were announced runners-up in the ‘City of Adelaide – the place to live, work and play’ category sponsored by City of Adelaide and received a cash prize of $400.

Honourable Mention for prize category ‘Your Friendly Council’ sponsored by LGITSA was awarded to team ‘Opt1c N3t’ for their entry ‘New Age Business’, a concept based on an app that will help people create or grow their small business.

“It is fantastic to see Mount Gambier represented at the state awards and we are so proud of what our local GovHack teams produced throughout the competition weekend held in the Library,” Mount Gambier Library Youth Services Coordinator Terasa Nearmy said.