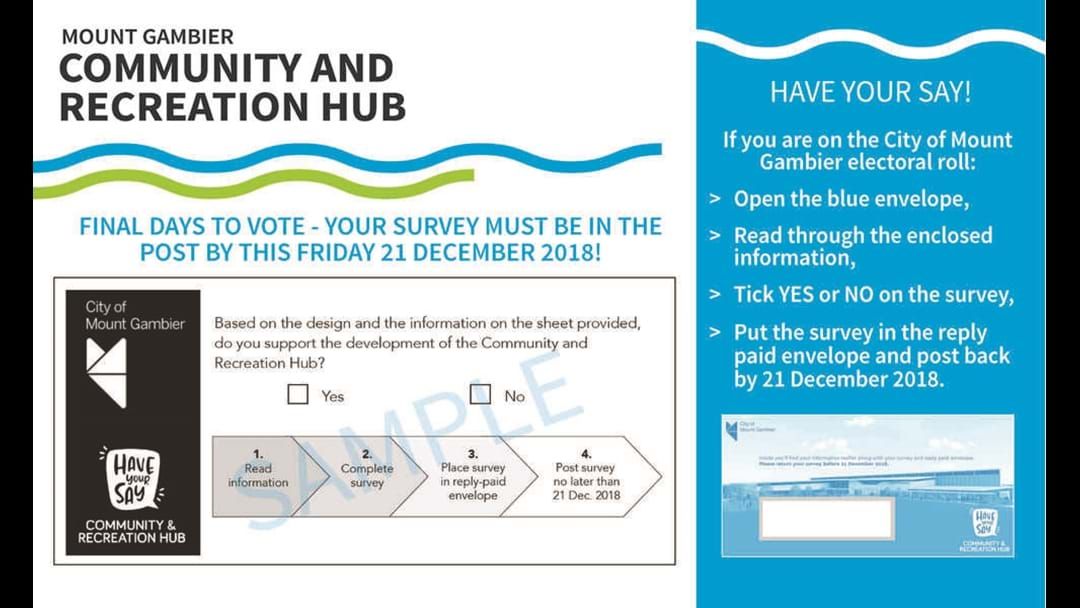 As at Tuesday 18 December 2018, a total of 6,207 Community and Recreation Hub postal survey responses have been received by independent survey provider Market Solutions. This represents a response rate of 32.11 per cent of 19,332 electors in the City of Mount Gambier.

Mayor Lynette Martin encouraged those who have not already voted to make it a priority to have their say by the end of the working week.

“If your letter is still sitting on your kitchen bench, I urge you to open the blue envelope, read through the enclosed information, tick ‘yes’ or ‘no’ in response to the survey question, put the survey in the reply paid envelope and post it back by this Friday 21 December 2018,” Mayor Martin said.

All surveys are barcoded for automated processing. Voting slips that have been tampered with will be considered invalid.

“The barcode on the survey voting slip is to ensure that only one response per resident is received and processed. Surveys that are not completed or have had the barcode tampered with cannot be processed.”

All electors should now have received their personally addressed survey by mail.

“If you own property in Mount Gambier and are not currently listed on the City of Mount Gambier Council Voters Roll dated 10 August 2018 come in to Council to confirm eligibility, be issued a survey and post it back.”

“The same applies to those eligible who did not receive voting papers, or may have changed address since the being added to the roll.”

Council expects to receive an aggregated report of the survey findings by mid-January 2019. The results will be used to gauge community support for or against the proposed facility.

Further information, including Community and Recreation Hub concept plans, frequently asked questions and a fact sheets are available at https://www.haveyoursaymountgambier.com.au/CaRH