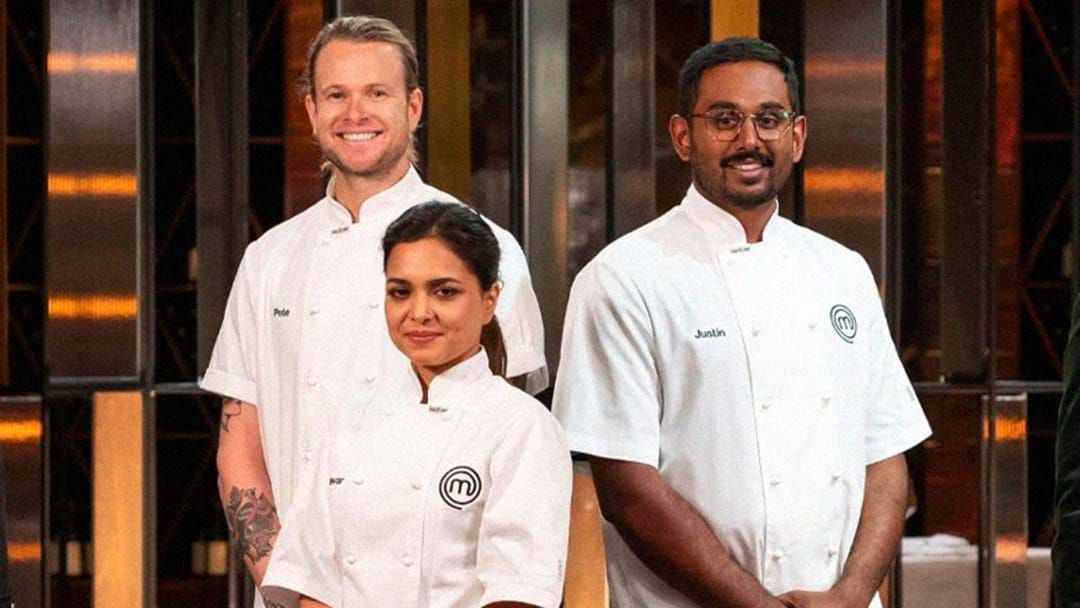 Monday night signified the beginning of the finale, which was split over two days this year because the contestants clearly weren’t stressed enough already.

The scores from both nights will be tallied at the conclusion of Tuesday’s season-ending episode, where the contestant with the highest score will be crowned the 2021 MasterChef champion.

The first challenge of the night saw eight of Australia’s finest chefs and restaurateurs, which some dubbed Australia’s Culinary Avengers, selecting ingredients for the mystery boxes, which the final three would have to incorporate into their dishes.

From the ingredients presented to them, Pete and Kishwar both chose to tackle King George Whiting while Justin opted to prepare a duck breast.

At the conclusion of the first round, the three divine dishes left Kishwar, Justin and Pete with scores of 21, 21 and 28, respectively, keeping the game close but leaving the former tattoo artist in the lead.

Heartstrings were tugged when it was revealed the contestant’s families were not only present for the second round, but would be selecting ingredients and “curveballs” from two massive, glass bowls, filled with golden globes, labelled with options.

Kishwar’s children, who are just so darn adorable, managed to fish out globes with white soy sauce as the ingredient and “smoke” as the curveball. Justin managed to receive ruby grapefruit and “fusion”, while Pete was left with quince and “steamed”.

Ominously and somewhat fortuitously, Pete openly stated that he didn’t know how to cook it.

Trying to recover from Round 1’s Whiting, which scored her unanimous 7/10s from the three judges, Kishwar prepared a special family dish of Smoked Rice Water with Aloo Bhorta and Sardines.

While Kishwar repeated the words of every other MasterChef contestant ever and said she was disappointed that the dish wasn’t “restaurant quality”, she managed to bag a perfect score, giving her a net-tally of 51 for the end of the finale’s first night.

Justin’s Round 2 dish was Poached Fish in a Curry Broth; a dish so good that Jock scraped the plate clean and called it perfect. The dish, loved by all three of the judges, grabbed Justin 29 of 30 possible points, leaving him with a total score of 50.

Unfortunately, the universe has a way of pointing out that, at some point, things seem to be going just *too* well.

Preparing Quail and Enoki Mushrooms with Asparagus and a Quince Glaze, Pete quickly found out fate may not be in his favour as Mel cut into a piece of quail so raw, it could have flown off the plate.

While he wasn’t too stoked with the hand he was dealt, it is safe to assume he wasn’t intending on serving a raw bird to a judge… in the finale, no less.

While Mel was less than impressed, and more than a little heartbroken, the quail served to Andy and Jock must have hit the mark, as the judges gave the dish a cumulative score of 25/30.

Pete’s initial seven-point lead from the first round ultimately worked out in his favour, with his total score of 53 putting him *just* in the lead for Tuesday’s finale final.