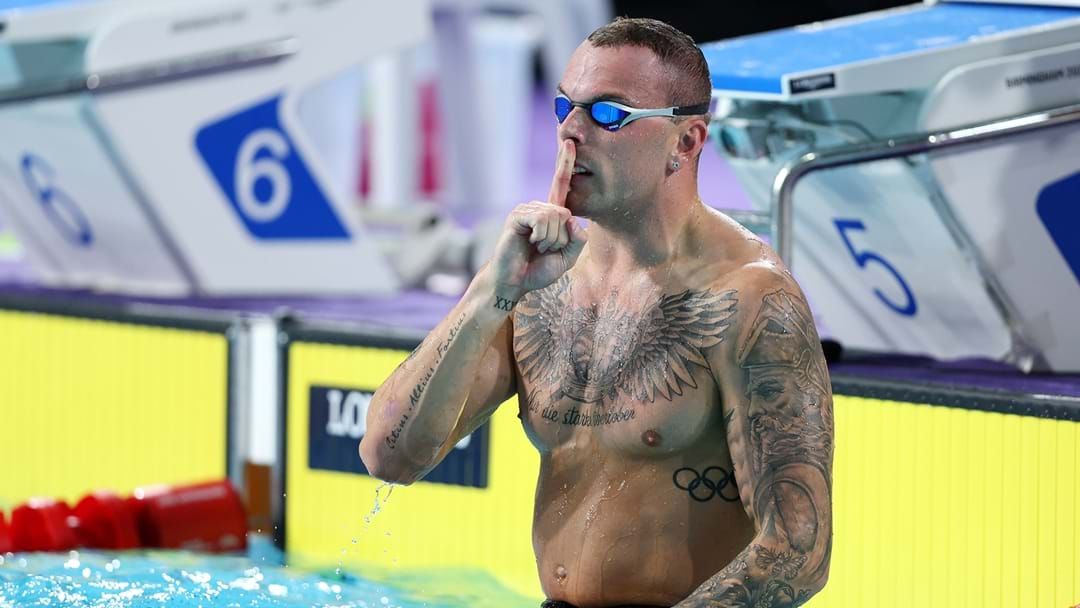 After touching the wall, Kyle Chalmers looked up to see the results, then lifted his index finger to his lips silencing the unwanted attention the swimmer had received over the previous 48 hours.

The gold medal he had just won was tarnished by the media attention surrounding his personal life.

Chalmers recorded a time of 47.51 seconds, and decided to go for the simple celebration, he told Channel Seven, admitting it was “hard to enjoy the special moment”.

“I thought about it before,” he said.

“Normally I do a bit more of a powerful celebration after a win but that one was one that probably means more than giving a fist bump or flexing the muscles.

“It is special to win, but unfortunately, I think it is hard to enjoy the moment when all that has happened has gone on. It makes it a challenging time.

“I am grateful that I was able to block it out enough to stand up and win tonight. I hope this is a learning point for everybody, and I hope nobody else has to go through what I have gone through.”

Chalmers continues to be the subject of “false news” surrounding the supposed love-triangle between his former girlfriend, Emma McKeon, and her new partner and swimmer, Cody Simpson.

“It’s all just false news that is actually just crap, it’s honestly just a load of shit that is not true,” he said over the weekend.

After his win, Chalmers added in his interview that the last 48 hours had been “hell” and considered whether he wanted to continue at the Games.

“This last 48 hours has been hell, it has been an emotional rollercoaster,” he said.

“I appreciate all the support that I have had. I would not have been able to get through [without] it.

“Yesterday there were points where I thought I would not continue on. That just lets the media win.

“For me, I had to stand up and do it, not for myself but for everybody at home, everybody going through similar things.

“I hope I can inspire, and I will continue this conversation.”

Chalmers pulled out of his 100-metre butterfly event on Monday night dubbed a “showdown” by media against Simpson.

While commentators speculated it was because of Simpson – adding fuel to the fire – many backed Chalmers’ decision, including Aussie legend Cate Campbell who said she would have done the same if in the position.

“He is conserving his energy, focusing on his 100m freestyle that he will swim later tonight,” Campbell said on Channel Seven.

“It’s what I would do in his position. He’s obviously had a really big couple of days.

“And he really needs to focus on where it counts, and he said he’s done the butterfly for a bit of fun but he’s now here to focus.”