Two legends of the game 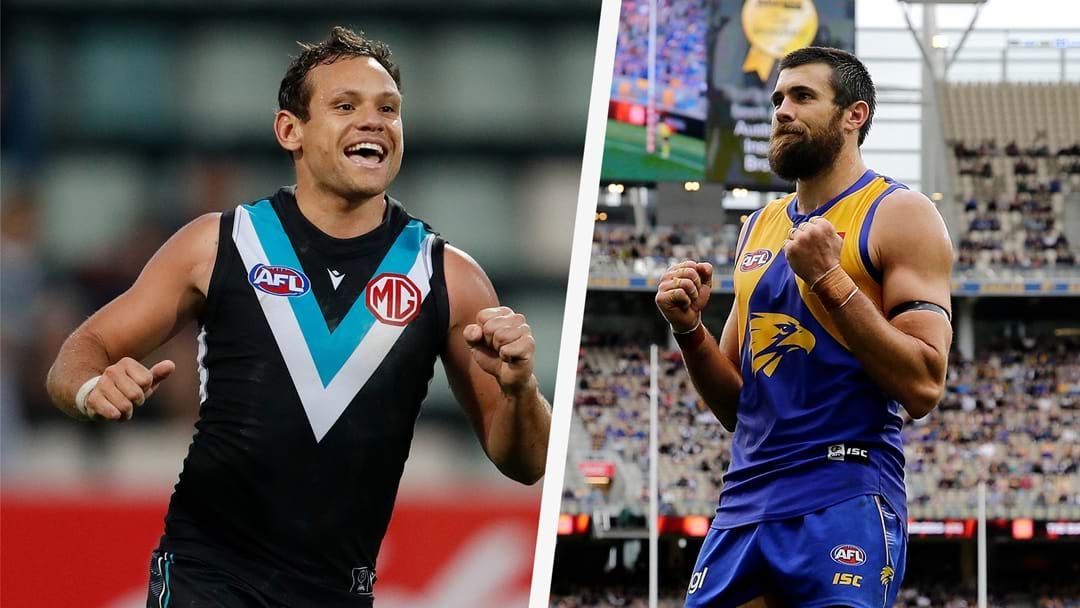 West Coast’s Josh Kennedy will play his last game against Adelaide this Saturday while Port Adelaide’s Steven Motlop has announced his retirement from AFL, effective immediately.

The goalkicking great is one of the club’s most decorated players and will hang up his boots after 17 seasons with West Coast and Carlton.

Kennedy told teammates said the toll AFL had taken on his body, of note injuries to his knee, was a main factor into the decision.

“It’s been a privilege to play so many years at this great football club and I’ll forever be grateful for the opportunity to represent the West Coast Eagles and Carlton,” he said.

“Footy and the West Coast Eagles have given me so much and I’ve loved the journey. I’ve made lifelong friendships and learnt so much from champions like Dean Cox, Darren Glass, Luke Shuey, Shannon Hurn and Mark LeCras.

“One of the biggest things I’ve wanted to do over my career is to have respect from my teammates - that’s always driven how I acted, trained or tried to play.

“My knee is a big reason for retiring. I think my drive to play is still there, but I’m realistic my body is not going to be able to take me to another season.

“To be able to farewell West Coast supporters one last time at Optus Stadium and say thank you for the incredible support over the years will be the perfect way to finish my career.”

Kennedy was drafted to Carlton from East Fremantle in 2005 with pick four.

He then reluctantly agreed to be a part of the Chris Judd trade to the Blues which saw Kennedy head back home and play 15 seasons with the Eagles.

Further accolades Kennedy will take with him includes Eagles vice-captain 2014-2020, seven-time leading goalkicker for the Eagles equalling with Peter Sumich, and runners-up best and fairest 2016 and third placed best and fairest in 2013.

West Coast coach Adam Simpson said Kennedy will be remembered as one of the greatest.

“Josh is going to be one of the game’s greats and one of the club’s greats,” he said.

“What he’s done in my time at the club, it’s just been a pleasure to see and watch. Coleman Medals, the ability to stand up in big games. Clutch, not just goals, but clutch moments.

“He’s a big-game player, but he also loves his teammates and loves his club.

“He’s going to go down as one of the greatest.”

Meanwhile, Motlop retires after 217 AFL games, 82 of those with Port Adelaide, and 135 prior across nine seasons at Geelong.

The Northern territory product informed his teammates of the decision this morning.

“It was always a childhood dream to play in the AFL and I’ll always be grateful to Geelong and to Port Adelaide for giving me the opportunity to achieve that dream,” he said.

“As a kid you just want to play in finals. I played in five preliminary finals and while it would have been nice to have won one, playing in those big games alongside my teammates is something I’ll always look back on fondly.

“There’s been a rich history of my family playing at Port Adelaide and to be able to get the opportunity come over to Adelaide, where my family was set up was a big part of why I moved across and it means a lot to say I had the chance to play at the club where I have such strong family links.”

That link comes from his brother, Daniel, who played for six seasons with the Power between 2006-2011 and his cousin, Marlon, also represented the club between 2008-2011.

Motlop joined Geelong in the 2008 National Draft at pick 39.

In 2015, he finished runners-up in the Cats best-and-fairest to Mark Blicavs.