It’s all about “flower power” 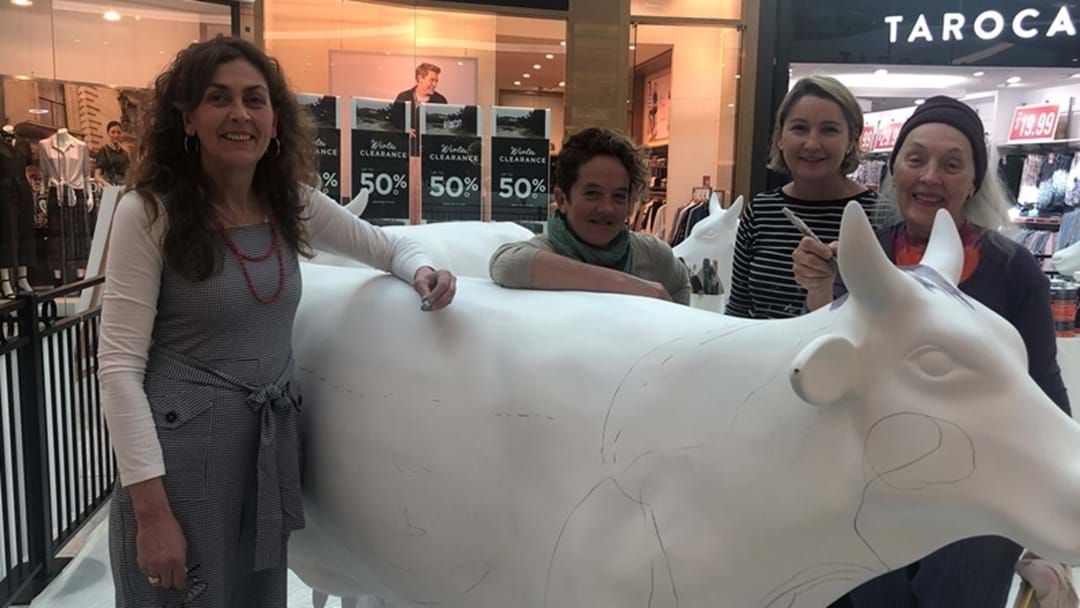 Local artists Kym Breeze, Joy Heylen, Mary-Kate Thomson and Jennifer Wright (Summers) are painting fibreglass cows in Grand Central this week, which will feature in the Grand Central Floral Parade and in-centre next month during Toowoomba Carnival of Flowers.

Head into Grand Central this week to watch local artists transform six fibreglass cows, which will feature on the Grand Central Floral Parade’s lead float and in the centre in September.

The centre had commissioned six artists to create designs on fibreglass cows through the lens of the Carnival theme ‘The Power of the Flower’.

“This year is the 70th anniversary of the Toowoomba Carnival of Flowers, so we’re taking our cue from history. In 1950 the first parade was led by a bullock team, so we are creating a contemporary version in celebration and recognition of this milestone.”

“People can come to Grand Central’s Centre Court and watch these talented local artists bring the cows to life from 9am-3pm Monday August 5 to Saturday August 10. There will also be artists working on Thursday evening from 5.30pm to 9.30pm.”  - Grand Central Marketing Manager Marieke Bridgeman

The fibreglass cows will be mounted on the float, paired with a floral carriage to lead
the parade, and will also be displayed in Grand Central.

The Grand Central Floral Parade will start at 3pm on Saturday September 21. It’s the only fresh floral parade of its kind in Australia.

Joy Heylen – Joy found her purpose and identity for being in sculpture. She has designed Grand Central’s lead float for the last several years, and is the Grand Central Floral Parade’s Creative Advisor. The design for her cow will draw on symbolic interpretation from the floral spray pattern of a paisley motif, which is a symbol of life and eternity.

Mary-Kate Thomson is a graphic designer / illustrator who grew up in Toowoomba and returned to the city to raise her family. The inspiration for her violet and wattle cow design is the beautiful flora of the Garden City, and the focus is the historically significant and iconic Toowoomba Violet. Many violet posies were sold post-war to fund the Mother’s Memorial. Wattle, a native flower, perfectly complements the non-native violet. Mary-Kate’s work is also featured on Grand Central’s Culture Wall on Dent Street.

Anna Bartlett is a contemporary painter whose mission is to share the joy of drawing and painting. Happy colours are her ‘thing’ and she says flowers are a fantastic way to explore colour. Inspired by Matisse and Ken Done, her paintings are often colourful and illustrative. The ‘Graphic Floral Cow’ she is painting for Grand Central is a bold, clean, graphic depiction of stylised floral motifs.

Jennifer Wright (Summers) is a well-known Toowoomba artist and Arts advocate. She has embraced a ‘walk back in history’ theme for her design. Each patch of history will show times on this place such as the volcanoes that made our soil rich, the First People going to a Bunya Festival, colonial pioneers, and the long history of where Grand Central now stands.

Katie Whyte is an abstract painter living in Toowoomba. She completed her Bachelor of Visual Arts (Honours) at the University of Southern Queensland in 2008. She wanted to create a design that was reflective of Spring time in Toowoomba and how the Carnival has helped shape our local identity over time. She took two quintessential Toowoomba elements and combined them to form the design – the shape of the horizon over the Toowoomba Range and the outline of flowers in bloom.

Kym Breeze has exhibited at various galleries in Toowoomba, Sydney and surrounding regional areas, and has also sold some works internationally. The main influence of her art has always been colour and texture. For this work, she draws on her earliest memories of Carnival as a child, and the tradition she started with her own children as they grew up – celebrating all the beauty of our city each year as Carnival came around. Family embraced by the flower, blue skies, green rolling hills and happiness.