National NewsGold Rush For Australia On Day One Of Commonwealth Games

Gold Rush For Australia On Day One Of Commonwealth Games 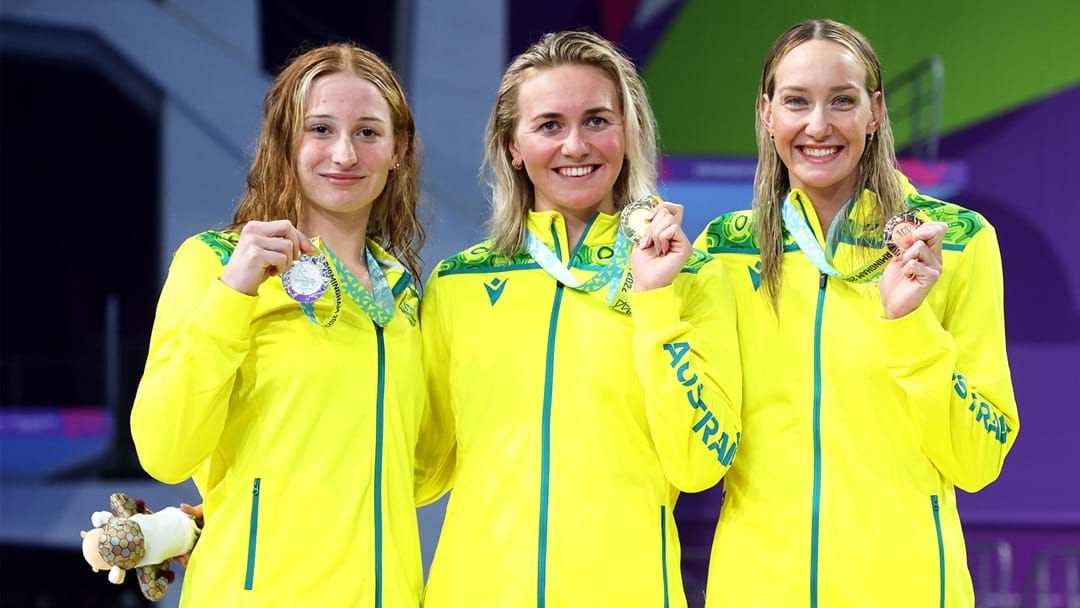 Aussie athletes have dominated day one at the Commonwealth games, bagging eight gold medals to take the nation to the top of the medals tally.

There were 16 gold medals up for grabs on Friday, with Australia’s eight coming from the pool or the velodrome.

In the pool, the Australian swimmers won five of the seven finals conducted and filled 11 of the 21 possible podium spots on offer.

Green and gold featured in all placings of the 200-metre freestyle, where Tokyo 2020 dual-gold medallist Ariarne Titmus set a new Commonwealth Games record of 1:53.89.

Only 0.13 seconds behind her was 18-year-old Mollie O’Callaghan, while in third was Madi Wilson who completed the trifecta.

“I knew there was a bit of hype around the world record, but I really don’t think about that much. I just go out there and try and race the best I can.”

In another hattrick for the Aussie swimmers, Elijah Winnington secured gold in the 400-metre freestyle, with Sam Short and Mack Horton finishing with silver and bronze respectively.

Stubblety-Cook recorded a time of 2:08.07, to edge ahead of England’s James Wilby, second, and Scotland’s Ross Murdoch, third.

"It was such a good field. Ross won in 2014, James won in 2018 so it was like three generations in one race. It was a star-studded field and a really exciting race,” Stubblety-Cook said.

"Four years ago [at the Gold Coast Commonwealth Games] I didn't make the final, so for me coming here tonight, it was just purely enjoyment and trying to get the best out of myself."

Closing out the night was Tim Hodge who secured an easy victory in the 100-metre backstroke S9, while Emma McKeon anchored Australia to a success in the mixed 100 metre freestyle relay.

At the velodrome, sprint team Leigh Hoffman, Matthew Glaetzer and Matthew Richardson made it a third track gold medal when setting another Games record.

The quartet initially set a Games record of 4:14.605 when qualifying fastest, then lowered the time to 4:12.234, far too good for their New Zealand opponents.

The men’s 4000-metre pursuit team, which had high gold-medal aspirations, had to settle with bronze after failing to qualify for the final.