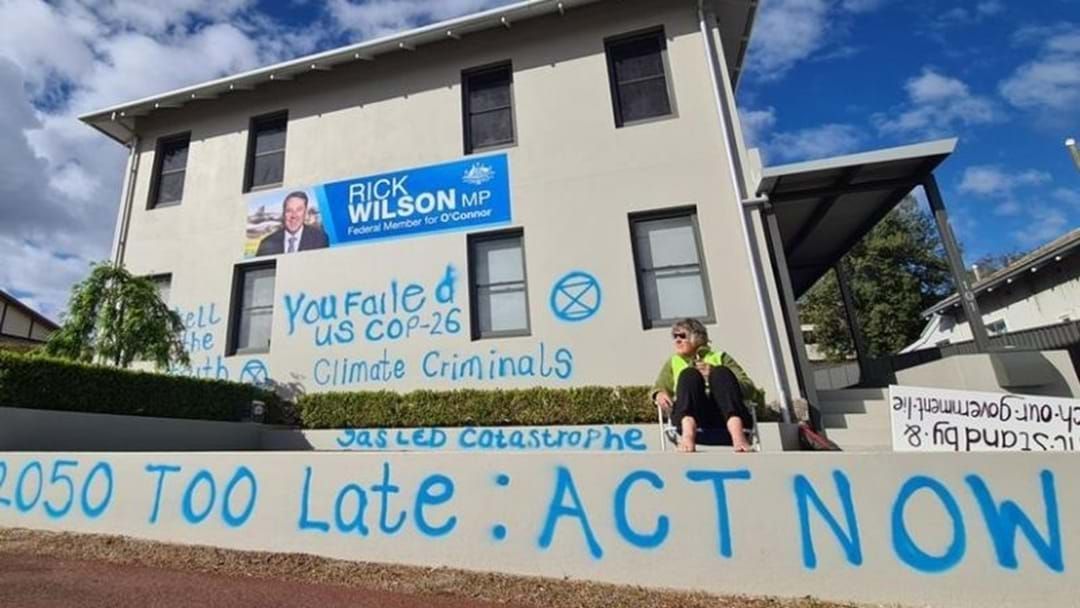 A Danish climate Activist has been charged with criminal damage over a protest outside MP Rick Wilson’s office in Albany.

A climate activist from Denmark has been arrested after supergluing her feet to a wall outside of MP Rick Wilson’s office.

The move was part of a nationwide climate protest.

Marsh also tagged the O’Connor MP’s office with a slew of accusatory messages including “tell the truth”, 2050 too late: act now”, “climate criminals” and “you failed us COP-26”.

Police eventually managed removed Marsh’s feet from the wall using solvent before arresting the 57-year-old and charging her with criminal damage.

Marsh was later released on bail.

The protest was one of many held across Australia, hosted by Extinction Rebellion members to denounce the Australian Government’s climate change record.

The protests were also organised to incite action as the United Nations Climate Change Conference (COP26) kicked off in Glasgow.

This year’s summit is expected to highlight commitments and strategies by world leaders to remedy climate change.

In the lead up to this year’s conference, Prime Minister Scott Morrison vowed to hit net zero carbon emission by 2050.

“I am here to tell the truth ... Rick Wilson’s voting trends in Parliament demonstrate his strong commitment to further fossil fuel developments,” she said.

“This is in direct conflict with the science.”

She also said she has no regrets after being arrested and charged for her actions saying she has “never felt less guilty,”.