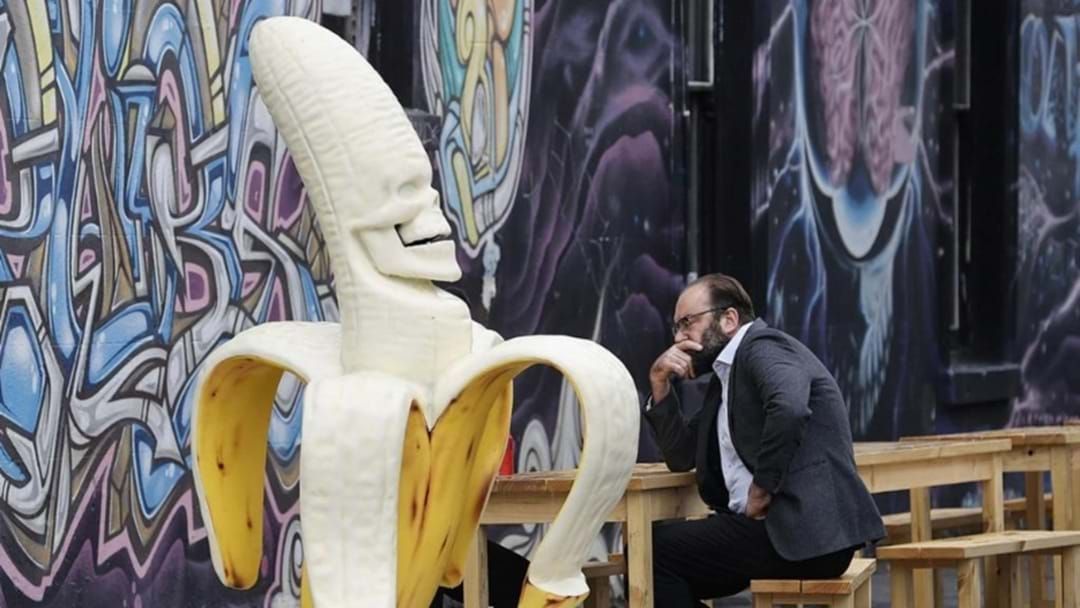 Pressure is mounting for a Melbourne council to keep its 'forbidden fruit' after popular British-American comedian John Oliver made an on-air bid for the controversial sculpture.

Once situated in Melbourne’s inner north, Mr Oliver has made an offer for the 1.8m peeled banana statue with a skull face to be relocated to the US.

On the latest episode of Last Week Tonight with John Oliver, the comedian made an outlandish offer for the oversized fruit.

“Since the citizens of Melbourne seem to think that their money has been wasted, I might have a solution for you because will gladly take that banana off your hands,” Oliver said.

“Melbourne, I’m willing to buy that giant banana off you for exactly $A10.

The Yarra City Council commissioned the piece for $22,000 as part of a $100,000 taxpayer-funded grant from the Transport Accident Commission (TAC).

Peeled back for all to see on Rose Street in Fitzroy late last year, the piece was received with mixed reviews by the public, including a callous attack by vandals who attempted to decapitate the banana.

The artwork, titled “Fallen Fruit" was created by Adam Stone, using "iconography, symbolism and narrative to address a major theme in his practice, that permeates every aspect contemporary society─hubris,” according to the description on Yarra City Council’s website.

“By revisiting and subverting this tradition of oversized sculpture, the artist hopes that Fallen Fruit can become a welcome spectacle for tourists and locals as well as an invitation to reflect on our human tendencies towards unsustainable excess, a warning for the future.”

Although Oliver's offer is well short of its value, he also said that he would make a $5000 donation to Australia Zoo’s John Oliver Koala Chlamydia Ward (a ward at Australia Zoo’s koala health centre that actor Russell Crowe named after him) and send a large statue of an alligator giving the finger.

The comedian also pledged to make a $10,000 donation to a local food bank.

Oliver gave the city one week to get back to him.