"Jack will always be loved." 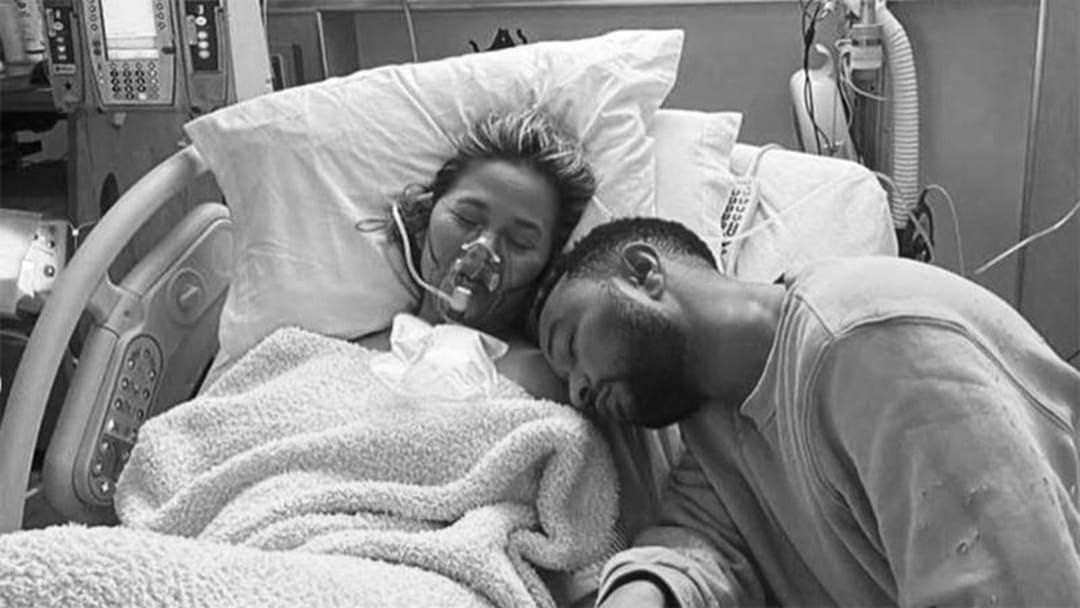 Over a month after announcing the loss of her baby boy, Jack, Chrissy Teigen has finally spoken out about her emotional experience.

In a very personal essay published on Medium, Chrissy decided to share her story on her pregnancy loss of her third child.

She began the essay with, "I had no idea when I would be ready to write this."

"Part of me thought it would be early on, when I was still really feeling the pain of what happened. I thought I would sit in the corner of my bedroom with the lights dimmed, just rolling off my thoughts. I'd have a glass of red wine, cozy up with a blanket, and finally get the chance to address 'what happened.'"

She continued to explain, "I didn't really know how I would start this, no matter the room or state I was in, but it feels right to begin with a thank you."

She revealed the biggest relief was not only receiving thousands of thoughtful messages but the ones which began with "You don't have to respond to this..." until she was ready.

She also revealed personal struggles during her second pregnancy which became problematic in her third.

She said her doctor had diagnosed her with "partial placenta abruption," something she mentioned she had experienced with her second child. However, with her third pregnancy, she encountered other issues.

"I had to deliver Miles a month early because his stomach wasn't getting enough food from my placenta," she shared, adding, "But this was my first abruption. We monitored it very closely, hoping for things to heal and stop. In bed, I bled and bled, lightly but all day, changing my own diapers every couple of hours when the blood got uncomfortable to lay in."

Despite all this, she tried to remain positive during her third pregnancy but after many nights in the hospital, the doctor finally told her it was time to say goodbye.

"He just wouldn't survive this, and if it went on any longer, I might not either," she expressed. "We had tried bags and bags of blood transfusions, every single one going right through me like we hadn't done anything at all. Late one night, I was told it would be time to let go in the morning. I cried a little at first, then went into full blown convulsions of snot and tears, my breath not able to catch up with my own incredibly deep sadness."

She added, "Even as I write this now, I can feel the pain all over again. Oxygen was placed over my nose and mouth, and that was the first picture you saw. Utter and complete sadness."

She signed off in her Instagram post by thanking those for the support during these tough times:

"I didn’t know how to come back to real life so I wrote this piece for Medium with hopes that I can somehow move on but as soon as I posted it, tears flew out because it felt so....final. I don’t want to ever not remember Jack.

Thank you to everyone who has been so kind. Thank you to the incredible doctors who tried so hard to make our third life a reality. Thank you to my friends and family and our entire household for taking care of me through all the adult diaper changes, bed rest and random hugs.

Thank you John for being my best friend and love of my life. A lot of people think of the woman in times like this but I will never forget that John also suffered through these past months, while doing everything he could to take care of me. I am surrounded, in a human therapy blanket of love. I am grateful and healing and feel so incredibly lucky to witness such love."

Our thoughts are with Chrissy and John, and with those who have also been touched by this heartbreak.

May little Jack rest in peace.

For more support, The Pink Elephants provides the latest resources, information and peer support for anyone impacted by early pregnancy loss.