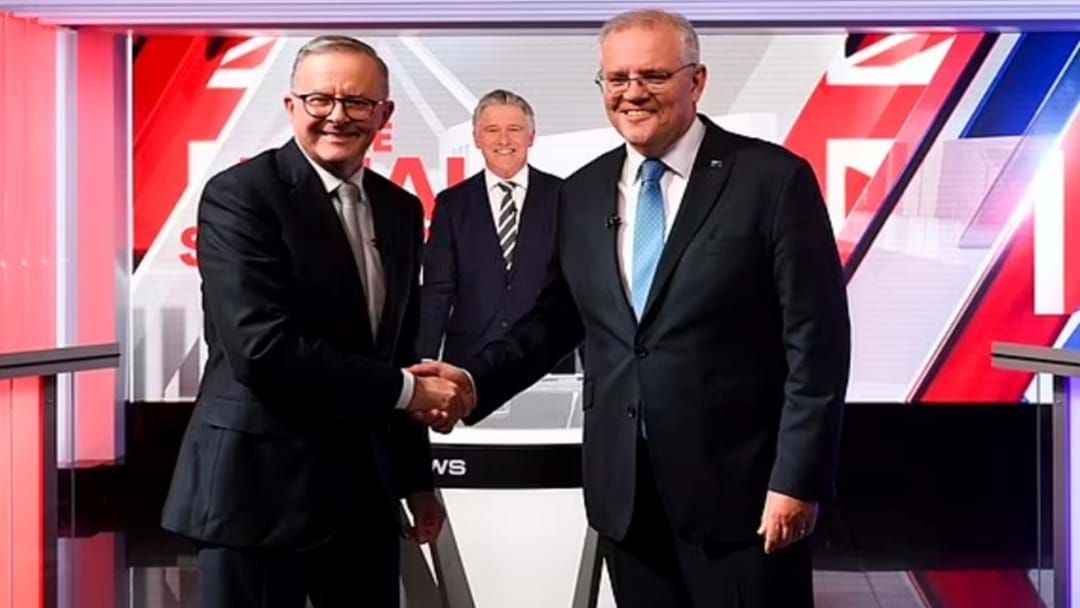 Anthony Albanese has been declared the winner of Wednesday night's third and final leaders’ debate.

Out of the 160 undecided voters in marginal electorates the Labor leader scored 50 per cent of support in the Seven network’s “pub test” compared with Scott Morrison's 34 per cent, while 26 per cent remain undecided.

With less than a fortnight until polling day, the much tamer debate, moderated by Seven’s political reporter Mark Riley, covered wages, the rising of cost of living, anti-corruption commissions, climate change, childcare and border protection.

The final debate also targeted Mr Albanese's comment from earlier that day, that he would back a 5.1 per cent increase to the minimum wage in line with inflation.

Denying that a pay rise would damage the economy, Albanese said the Fair Work Commission was independent of government, however he would welcome a decision that saw wage increases match inflation.

“What we have said throughout this campaign is that we don’t want people to be left behind,” Albanese said. “If the increase is less than the inflation rate then what that means is they will be getting a real wage cut – and they deserve better than that.”

When asked by the moderator how much of a pay rise low-income earners deserved, Morrison said the Fair Work Commission was “the right place to do that”.

After much toing and froing, and playing to their respected strengths, Albanese stood out over his emotional pitch to the people, while Morrison was solid on the economy and boat turnbacks.

But perhaps it was the final question posed to each leader, asking them to compliment the other on a strength they admired in the other, which cemented the decision for some of the voters.

The prime minister said he admired that Mr Albanese "[had] never forgot where he has come from".

"He has shown the ability to rise to be the leader of one of the oldest parties in this country, and he should be commended for that." he said.

However, Mr Morrison then went on to eviscerate the Opposition leader’s ability to lead a country.

While in comparison, Mr Albanese simply acknowledged the job of prime minister as “obviously a difficult one to do” and said he admired Morrison’s commitment to the nation.

“And on a range of issues, to name one, mental health in terms of young people,” Albanese said. “We have seen increased funding for mental health.”