Perth NewsRoss Lyon Has Been Sacked As Fremantle Dockers Coach

Ross Lyon Has Been Sacked As Fremantle Dockers Coach 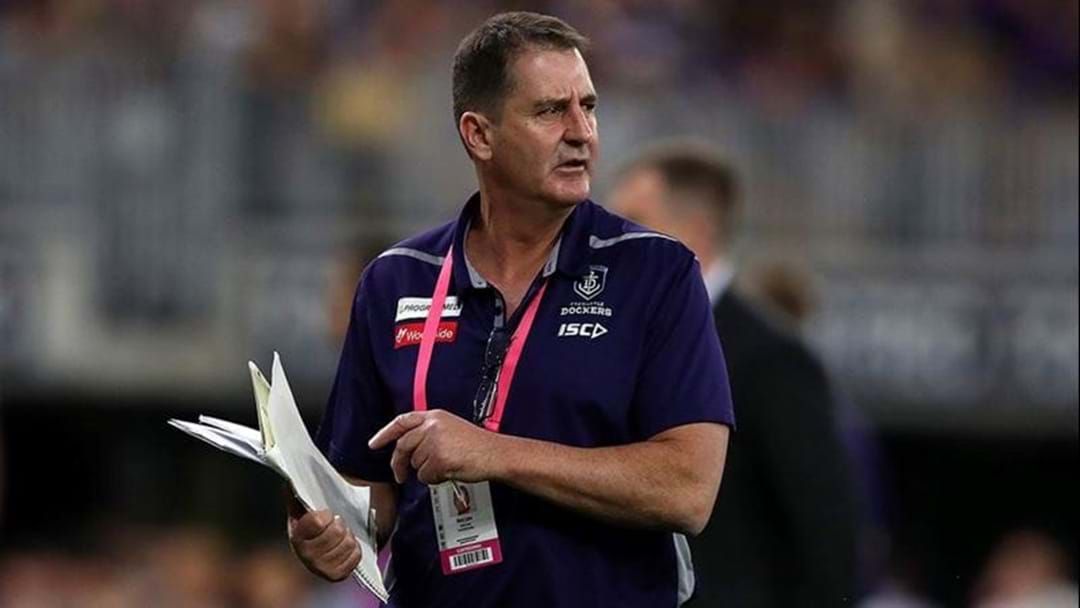 Ross Lyon has been sacked as coach of AFL club Fremantle.

The Dockers board told Lyon, who had a year to go on his contract, of their decision on Tuesday morning.

Fremantle chief executive Steve Rosich has also been terminated with the club missing the finals for the fourth consecutive season.

Dockers president Dale Alcock will confirm the sackings at a media conference at 1pm local time (1500 AEST), with the decisions coming as somewhat of a bombshell.

Lyon was under huge pressure earlier this season after a poor stretch of results of five losses of six games between rounds 14-19.

But the veteran coach seemed to revive his prospects after guiding Fremantle to an upset 34-point win over Geelong in round 20.

Losses to St Kilda and Essendon over the past fortnight killed off Fremantle's finals hopes, but the general consensus was Lyon had done enough to continue as coach in 2020.

Lyon labelled himself as unsackable on July 9.

"I can guarantee you I'll be around," Lyon said at the time.

"My performance dictates we'll be around. We're a rebuilding team."

Lyon guided Fremantle to finals action in his first four years at the club, including the 2013 grand-final loss to Hawthorn.

But the Dockers fell off a cliff at the end of 2015 and haven't made the finals since.

Rumours are rife that players including brothers Brad and Stephen Hill, Ed Langdon and Luke Ryan could leave the club.

Fremantle had made major improvements this season but it wasn't enough to save Lyon's job.

Injuries to key players Jesse Hogan, Alex Pearce, Matt Taberner and Stephen Hill hurt Fremantle's cause, but it was the team's continued poor skill errors that frustrated fans the most.

Lyon joined the Dockers in September 2011 amid controversy - he had just coached St Kilda to the finals and had a year to go on his contract with the Saints.

But Lyon enacted a get-out clause in his contract and joined Fremantle, who had axed Mark Harvey as their senior coach despite him also having a year to run on his Dockers contract.

Lyon left St Kilda with the best winning percentage of any other St Kilda coach and was the first person to coach the Saints to four consecutive finals series.