Music NewsMusic From The Home Front Is Back With The Kid Laroi, Amy Shark And More

Music From The Home Front Is Back With The Kid Laroi, Amy Shark And More

Michael Gudinski's dream gig is back 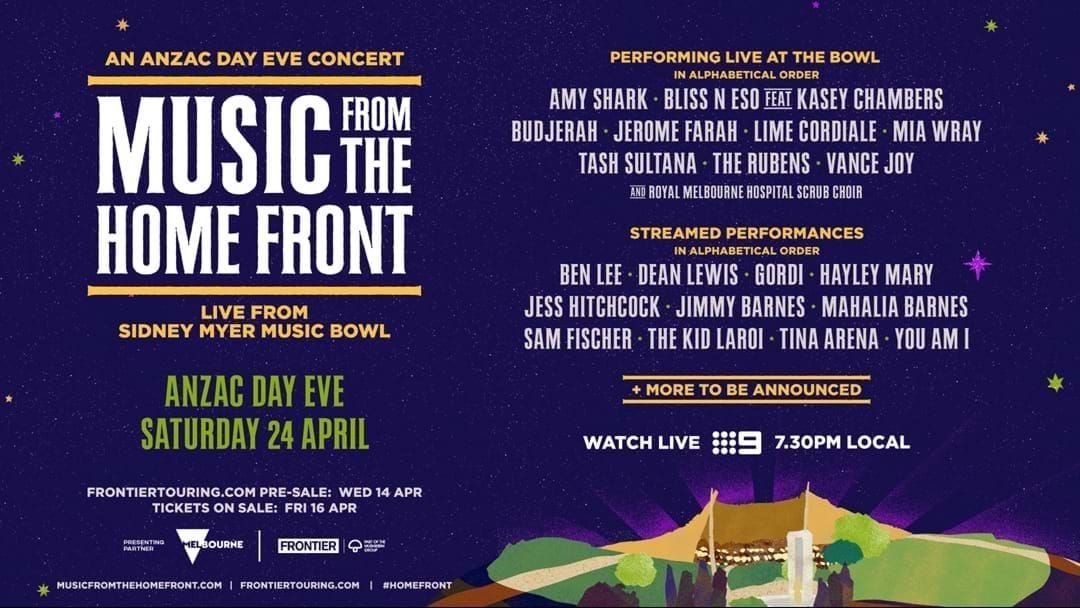 Australia's biggest artists are getting together to play the second Music From The Home Front gig, happening this Anzac Day Eve.

The event is being televised nationally and a live concert at Melbourne's Sidney Myer Music Bowl, with incredible live performances pre-recorded and broadcast on the night.

Catch Jimmy Barnes, The Rubens, You Am I, Dean Lewis, Amy Shark, Vance Joy, Tina Arena and heaps more in the event, with more to be announced.

Watched by over 1.419 million viewers on Anzac Day 2020, Music From The Home Front was the most unique concert ever screened on Australian television, capturing an important moment in our nation’s history, born out of Australia and New Zealand’s first lockdown response to the COVID-19 pandemic.

Conceptualised by the Mushroom Group’s Michael Gudinski and staged in a mere nine days, Music From The Home Front 2020 saw an unprecedented line-up of Australia and New Zealand’s most iconic musicians united together to remind us that we were not alone – even when we were socially distancing.

It was Michael’s incredible passion and vision that created Music From The Home Front, a celebration to unite people through the power of music.

Tickets for the Bowl concert will go on sale Friday 16 April at 12noon AEST via musicfromthehomefront.com with prices starting at just $69 (plus booking fees). Pre-sale tickets will be available via frontiertouring.com/homefront from Wednesday 14 April.

Meanwhile, the broadcast will also feature incredible special location performances from yet even more artists – those clips also screened at the venue during the concert (as well as on TV). Those artists include (in alphabetical order): BEN LEE, DEAN LEWIS, GORDI, HAYLEY MARY, JESS HITCHCOCK, JIMMY BARNES, MAHALIA BARNES, SAM FISCHER, THE KID LAROI, TINA ARENA, YOU AM I … plus more to be announced.

Music From The Home Front proceedings will kick off on Anzac Day eve (Saturday 24 April), from 7.30pm on Channel 9 and 9Now and YouTube (7.30pm AEST).