Rainbow on the Plains Festival is back! 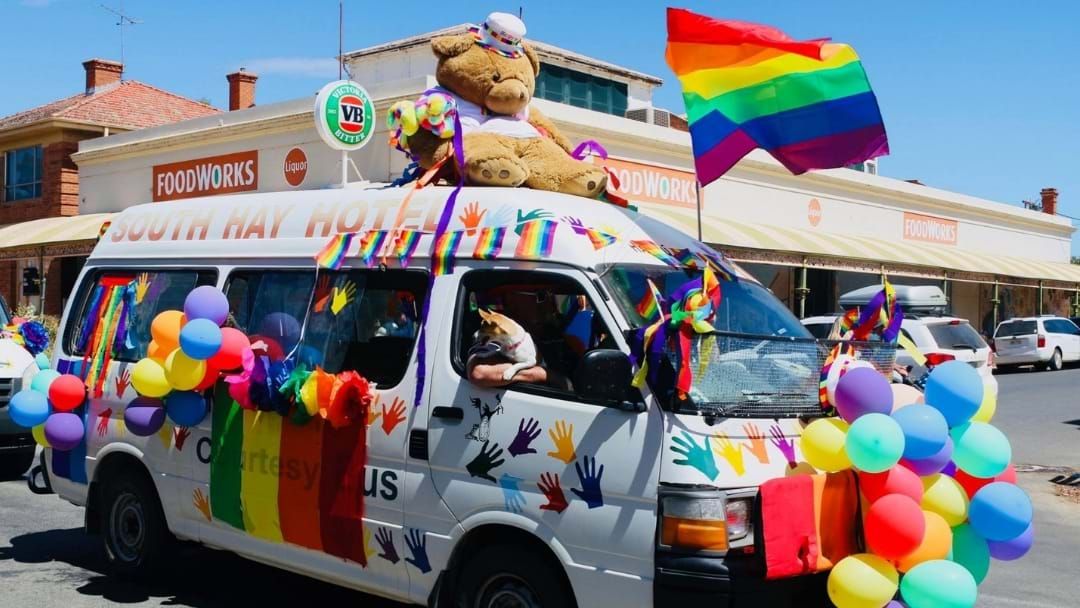 NSW's leading health promotion organisation, ACON, is supporting Hay Mardi Gras Inc. for a second year in a row to host their annual Rainbow on the Plains Festival, which celebrates regional and rural LGBTI culture.

“ACON is proud to once again be a Community Partner of the Rainbow on the Plains Festival - a fantastic event that not only brings together LGBTI communities, and their allies, from regional NSW, but across Australia,” said ACON CEO Nicolas Parkhill.

Last year the Rainbow on the Plains Festival took Hay by storm. Businesses along the main street decked their shopfronts with rainbow decorations, thousands of people marched or watched the Festival parade, and partygoers raised the roof on the local Hay Ex-Services Club at the Hay Mardi Gras Party.

This year, on Friday 29 March, ACON will again kick off the Rainbow on the Plains Festival with a VIP Reception for sponsors, stakeholders, and dignitaries at the historic Bishop’s Lodge. The Reception is an opportunity to officially open the Festival, and thank those involved in supporting the events held over the weekend. In the lead up to the Festival, ACON will also be delivering an LGBTI Awareness training session and hosting a local rainbow community gathering.

Saturday sees the festivities continue, with a street parade and fair day, followed by the Heaven on Earth party in the evening, where audiences will be entertained with drag queens, pop-artists, and DJs from Sydney, Melbourne, Albury Wodonga, and of course Hay.

Krista Schade, Chair of Hay Mardi Gras Inc. said, “The Festival has once again secured amazing support from organisations including community partners ACON and Flourish Australia, major sponsor De Bortoli Family Wines and Hay’s local businesses. We are proud to be again hosting this year’s Rainbow on the Plains Festival, and look forward to making it bigger, and more colourful than ever before.”

“Events like the Rainbow on the Plains Festival enables ACON to connect with local LGBTI people and people living with HIV in regional areas. Partnering with local groups, services, and events like these across the whole of NSW to promote HIV prevention, support and LGBTI health services is a key priority for us,” Parkhill said.

“Visibility, acceptance and social inclusion has a profound positive impact on LGBTI people’s health; when we live in environments where we don’t have to hide, do not feel shame and can be our authentic selves, we experience better health outcomes and are more able to fully contribute to the communities in which we live.

By working together, we can continue to build the health and wellbeing of our communities.”

For more information, you can visit the Facebook page here