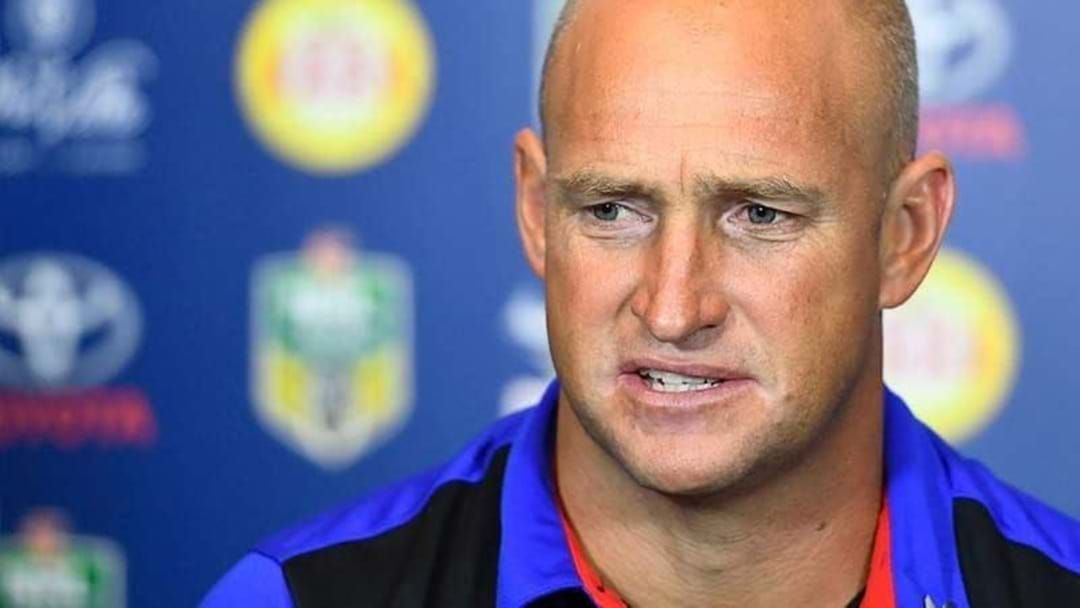 The Newcastle Knights have confirmed coach Nathan Brown will step down at the season's end.

It's understood both parties agreed to the move earlier this week - and the playing group has been told of the shock news.

The 46-year-old has been at the helm at Newcastle since 2016 and signed a performance-based contract last year.

Here's the full statement from the club:

Head Coach Nathan Brown’s tenure at the helm of the nib Newcastle Knights will come to a close at the end of the 2019 National Rugby League season.

With a focus on a Top 8 finish to the season, both Brown and Knights Chief Executive Officer Philip Gardner feel it’s the appropriate time to move on with his career.

Gardner praised Brown’s leadership through one of the most tumultuous periods in the Club’s 32-year existence.

“Nathan will go down as one of the most important coaches in Knights history,” Gardner said.

“When he joined our Club ahead of the 2016 season, it was at its lowest ebb. The sheer size and scale of the task he was faced with was monumental. It would have broken a lesser man.

“Put simply, it would be wrong to measure his contribution to the Knights in wins and losses alone.

“Nathan shaped our roster as he did our Club. He once again made Newcastle a place that players wanted to not just play in, but play for.

“His record speaks for itself. He has laid the platform for the team to return to premiership contention, and he has been the driving force behind adding both depth and quality to the roster.

“He brought true world class talent back to the club in the signings of Mitchell Pearce, Kalyn Ponga, David Klemmer, Tim Glasby and more. He also led the development of home-grown talents like Lachlan Fitzgibbon, Daniel Saifiti, and Mitch Barnett, who all grew immeasurably under his leadership.

“And in the years to come, we will see his hard work pay off when a new wave of local juniors enter the ranks of Knights NRL players – and this time, they will be ready to step up to the challenge.

“But more than that, Nathan’s calm and consistent manner is rare among the ranks of NRL coaches. He is a leader of men and a good man himself. His respect for his players, colleagues and the game sets him apart and is something he is known for, not just within the Club, but across Rugby League.

“Nathan leaves with our utmost respect and gratitude for the transformational role he has played as head coach of the Knights. What’s more, he leaves with our thanks. When the Knights return to the upper echelons of the NRL, Nathan Brown will be able to take his fair share of the credit.”

Brown has coached the Knights on 93 occasions since joining the Club ahead of the 2016 season, seeing him sit third on the all-time list of Knights coaches by appearance, behind only Premiership Winners Michael Hagan (155 matches as coach) and Malcolm Reilly (98 matches).

With the rebuild of the Club complete, Brown said the time is right to move on.

“My main job was to come here and put the Club back together,” Brown said.

“It’s been a tough but enjoyable job. I’ve met lots of great people and I feel the club is far better off for me coming here.

“The roster and salary cap issues have been resolved and there’s the potential of a team to have sustained success.

“A lot of the heavy lifting has been done and now I’m leaving it to the next group of club leaders to continue the job.

“But it’s important to remember the year is not over and I look forward to finishing the season off strongly and push for a final birth.”

The Knights now commence the search for a new coach.