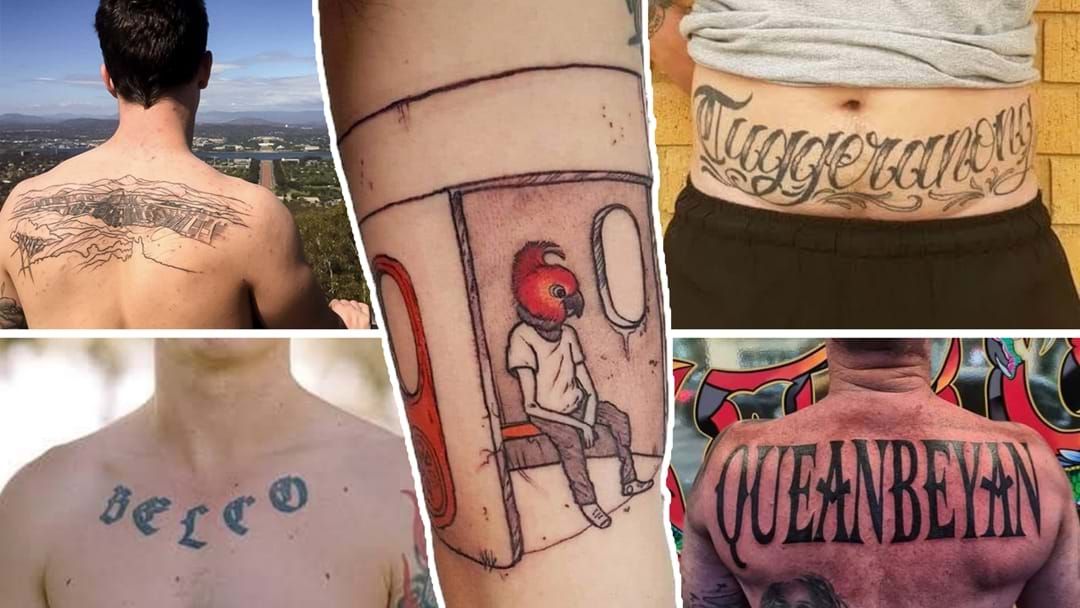 Photos of a proud Queanbeyan resident’s new back tattoo went viral online this week as some locals questioned ‘Why?’ while others offered up their ‘mad respect’.

That got the team here in the Hit104.7 Newsroom wondering - what other local ink is getting around on the streets of the Capital?

We put the question to you and did a little bit of our own digging, to uncover some of Canberra’s very best in permanent pride.

Many lament at the idea of a Queanbeyan tattoo wrapped across their body, which makes sense now, when you'd rather be repping the 'Tugg Life'.

Local pride appears to be just as strong on the Northside too...

The ACT's faunal emblem, the Gang-gang Cockatoo is seen here 'just waiting for a mate', we can only hope it's got its MyWay card topped up before jumping on an Action bus.

Walter Burley Griffin's design for the Capital is too good to only be viewed from afar or on maps, why not carry it around with you? Giving your friends endless lookout opportunities.

Lima Gilmartin has taken 'Bleed Green' to a new level with his 'old and new' Raiders inspired tattoo, lovingly inked during the Green Machine's last Grand Final appearance back in 2019.

Canberra's iconic cylindrical bush shelters have become synonyms with the Nation's Capital for many local residents...

Inspiring plenty of transport inspired ink on the bodies of fair-dinkum Canberrans.

What may seem like an alien scribble to some is actually a map to others, the perfectly designed streets of the Parliamentary triangle providing the inspiration for this tat.

Yes! That's Right! Sydney is NOT the capital city of Australia and this ink on a very tired and frustrated Canberran is here to prove it.

An icon on the Canberra skyline, Henry Bowyer proudly dons Canberra's Telstra Tower on his torso.

And we can't forget about our friends across the border, Melinda Smith now lives in Perth but is still rocking a Queanbeyan postcode, saying the NSW city will always be her home.

Have we missed anything? Do you know of any better Canberra inspired ink? let us know in the comments below or send us a message on Facebook.